That’s it, folks. We’re done with the 2015-2016 regular season of the NFL – and a result, done with this column. It’s been a fun ride, with several halftime draws, kicks on fourth and shorts, blown timeouts and wasted challenges throughout the year. At the time I’m writing this, seven head coaches have either been fired or resigned from their franchise.

That said, it’s time to celebrate the end of the regular season with some totally-official and objective coaching awards.

NOTE: Apologies for the late article this week. Turns out that I still have to put in a good amount of work for an online class.

Last week, I wrote a 1500 word or so piece centered around Kelly’s rise and fall with the Philadelphia Eagles. Among rumors that circulated about him were that he was a racist, dictator-like megalomaniac within the locker room.

Like I said earlier, the problem with Kelly wasn’t his inability to coach a game – it was him losing a power struggle with the front office and also not having enough support in the locker room to keep him around.

Although this is mostly speculation on my part, I suspect that the Eagles would have probably kept Kelly around had he not been such an albatross within the front office as well. Perhaps Philadelphia offered him a chance to come back on the condition that he was no longer allowed to maintain control over the team’s scouting, personnel management, etc. 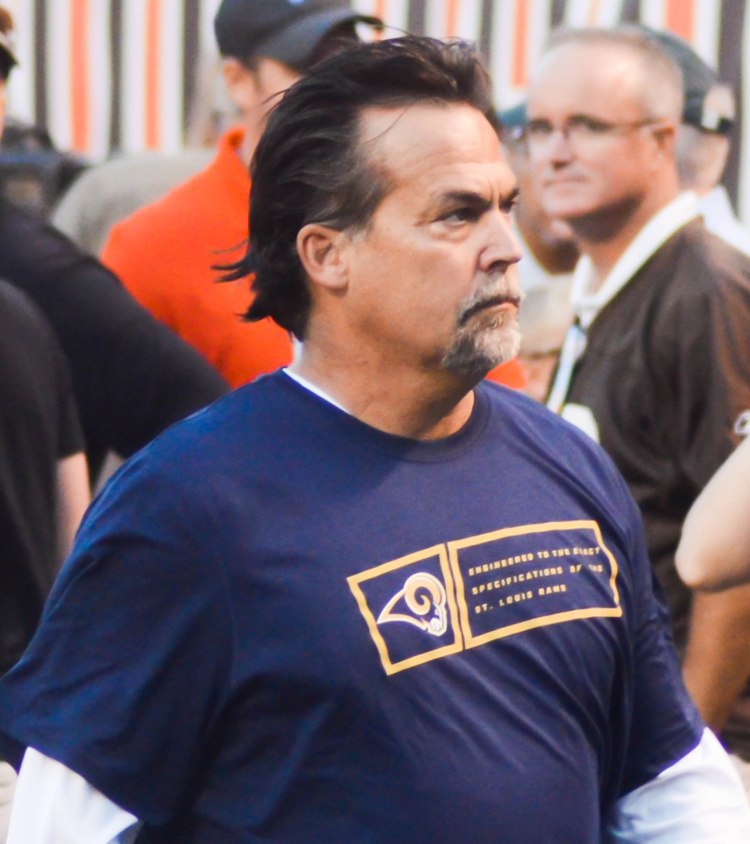 I already took a look at the teams that were most unwilling to go for it earlier this year when I created the “Chicken Index:” a number that takes the amount of times a team punts or kicks a field goal on fourth and short (defined by needing two yards or less), divides it by the total amount of fourth and short attempts and multiplies the result by 100. Take a wild guess where its name comes from.

When I updated the Chicken Index for end of the season stats, I found out that the biggest chicken in the NFL was Fisher with an 86.7 rating on 15 attempts.

While his conservatism might stem from the Rams’ lack of an offense outside of running back Todd Gurley (they rank No. 29 in Football Outsiders’ offensive defense-adjusted value over average), it certainly doesn’t help. If anything, continuing to play passively on fourth down only contributes more to an inability to score points.

For those curious about the rest of the Chicken Index, here’s the full table. It’s obvious not an absolute indicator of passive coaching or effective coaching, but just a fun “statistic” I made.

“The Out of Time Award” = Tom Coughlin

Despite what I’ve written before. Coughlin is most certainly a Hall of Fame caliber coach. Even outside of his Super Bowl-winning success with the New York Giants, Coughlin’s decade-long run with the Giants should be a model for future coaches on how to maintain relationships with players and the front office.

What should not be emulated is Coughlin’s penchant for blowing late games – especially this season, where New York finished 3-8 in games decided by one possession or less. This included a painful opening loss where Coughlin left too much time left in the game for his opponents to make a comeback, another loss which I wrote about in great detail and three consecutive late-game losses to New England, Washington and the cross-town rival Jets in the middle of the season. Had the Giants won half of those, they could have still made the playoffs. Instead, they are at home and without a head coach. 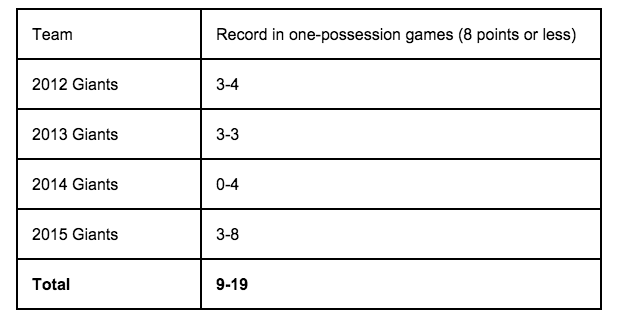 For reference, a 9-19 record in one-possession games is equal to about a 47.4 winning percent, which over the course of a regular season would be about 7.5 wins. While some might point to this record as simply bad luck on the Giants’ part and not necessarily Coughlin’s fault, I think the record over four seasons illustrates a pretty strong correlation between his mismanagement of timeouts in late-game situations and losing.

Consider that the results of one-possession games are essentially a coin flip between the team teams playing (due to its innately high-variance) and it becomes clear that though Coughlin may benefit his teams in other areas, late-game situations are not one of them – even if two of his Super Bowl victories ironically came from clutch plays near the end of the games.

Second Worst Playcall of the Year: Half-time draw by Andy Reid against the Broncos

There is literally no point to this play, as I have mentioned before. Don’t do it, coaches.

my sports play of the year in all of its glory: the Colts botched fake punt vs the Pats https://t.co/y0yehE0Nj1

Was there any doubt which play I had to mention in this column?

Another funny note: when informed that he was staying with Indianapolis after their disappointing 8-8 season, Pagano said it was “absolutely the best day of my life.” This came from a guy who literally survived cancer. Just think about how messed up that is.

The Coaching Corner Goat of the Year = Mike McCoy

Where do I start with McCoy? His conservatism on fourth and short, which ranked just behind Fisher as the biggest wuss in the league, per the Chicken Index? The San Diego Chargers’ 3-9 record in one-possession games, including a stretch where they lost five straight games by a combined 24 points?

Even when it came to developing a successful offense, where the former Broncos offensive coordinator and quarterback coach McCoy was supposed to shine, he was relatively disappointing, leading the Chargers to a mediocre No. 26 placing in points scored per game. This included a No. 31 finish in offensive rushing defense-adjusted value over average, per Football Outsiders. Banged up offensive line or not, such a statistic is unacceptable for a team that starts Phillip Rivers.

Although he never had legendarily horrible performances like some of his peers, McCoy’s consistently disappointing talent development, passiveness on fourth down and inability to deal with late game situations makes him worthy as the worst coach of the year and a great conclusion for a column I have thoroughly enjoyed writing throughout the season. Thank you to all my readers (all five of you), my friends , family and especially two of my awesome colleagues: Daily Campus sports editor Matt Zampini and my managing editor Matt Zabierek – both who inspired me to write this column every week and further instilled my love of professional sports. See you next week, with another topic!