January 13, 2013.  Before Get On My Level 2016, that was the last time Captain Falcon placed top eight at a Super Smash Bros. Melee championship (an event to feature all five of the world’s top five players) in Apex 2013. Back then, Hax was considered Captain Falcon’s most promising representative, as he was hyped up by the East Coast so much over the year that he ended it ranked No. 6 in the world.

But in the eyes of many, including Hax himself, that was the best Captain Falcon could ever do. Although he got close to defeating Dr. PeePee at EVO and had taken sets from Mew2King before at locals, Hax never defeated a god at a national while playing Captain Falcon. Switching to Fox, Hax also decried his character as being bad – and several believed him. 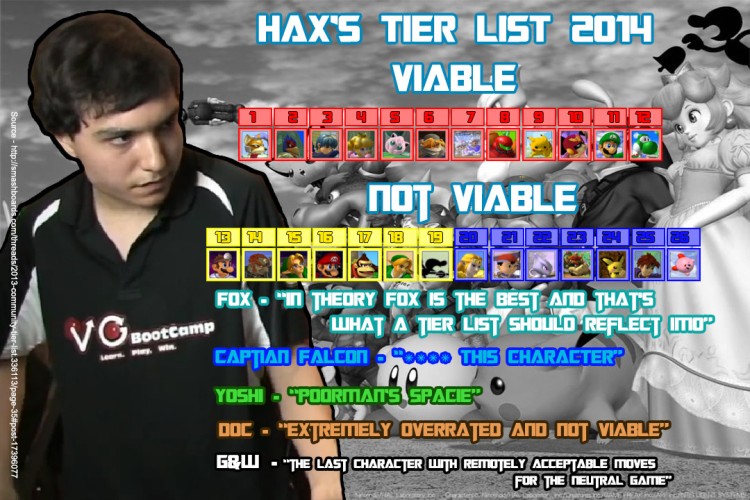 As I’ve written before, Captain Falcon didn’t suddenly see a drop in quality of representatives. Players like S2J, Wizzrobe, Gahtzu and Gravy pursued advancing his metagame, with Wizzrobe and S2J even taking sets off gods (PPMD and Hungrybox) in smaller events or exhibitions. Wizzrobe’s top eight appearances at DreamHack Austin 2016 and PAX Arena, along with S2J’s strong placing at Pound 2016 showed a good amount of promise for the character at supermajors. However, success at the national or championship level hadn’t happened yet.

Many people agreed that Hax’s Falcon laid the groundwork for how the character should be played. Rather than being based around hard reads and flashy aggression, Hax was safe, conservative, dash dance heavy, risk averse and tactical about his gameplay. Although S2J’s style is certainly more risk taking and aggressive, both Wizzrobe and the rest of the 20GX Falcons were similar to Hax. For the most part, the latter is the direction Falcon was expected to head in.

In Ontario, a Nicaraguan player, “n0ne” quickly grew in prominence. Heralded by his biggest fans as “S2J with edgeguarding,” n0ne became known for his flashy combos, baits, and calculated, but unorthodox decision-making. His relentless play was risky and dazzling –  more reminiscent of players like Scar and Lord than it was of Hax.

At the end of 2015, n0ne’s first year on the MIOM Rank, he finished No. 58. While he was thought of as one of the scene’s rising stars, he was also one of its most unpredictable – for better and worse. At his best, he beat players like Colbol and Professor Pro, but at tournaments like EVO 2015 and The Big House 5, he didn’t even make Top 64.

N0ne started off 2016 with a bang, defeating PewPewU at GENESIS 3 and finishing 33rd. Placing 17th at Pound 2016, becoming the best player in his region, n0ne continued to do well, also finishing fourth at Fight Pitt VI and ninth at EGLX in Ontario.  Heading into GOML 2016, yet another tournament held in his region, n0ne had an opportunity to make himself look even better.

However, no one could have ever possibly predicted how far n0ne would exceed expectations.

Initially making it to winners finals of his pool, n0ne lost his first game against Moky, a fellow regional player and technical Fox, before winning the next two games to make it out. Yet due to his relatively low seed at the tournament, n0ne had to play Ice next, losing that set 2-1, though he brought the European legend to his last stock.

Due to the talent at GOML, getting sent to losers before Top 32 even started already set n0ne back, especially because his next opponent was Vanitas. While Vanitas wasn’t considered to be on the same caliber of skill as n0ne, he was still a well-respected Ice Climbers in his region. Although n0ne managed to win their set 2-1, this was also a matchup that the Nicaraguan Falcon was known for detesting. Earlier in the year, he was 3-0’d by dizzkidboogie at Fight Pitt VI.

To start Top 32, n0ne 3-1’d Trulliam, a fellow Ontario rival, before finding a familiar face as his opponent for 17th: PewPewU, the guy he defeated at GENESIS 3. Proving that it wasn’t a fluke, n0ne 3-2’d him, defeating PewPewU’s Fox and moving onto Top 16. His next opponent was HugS: the SoCal Samus legend who finished over 30 spots above n0ne on the previous year’s MIOM ranking. Their last set was a nail biter 3-2 at GENESIS 3, but in HugS’ favor. Could N0ne turn it around this time?

N0ne two stocked HugS in the first game before just barely losing the second one. Now having his counterpick ready, n0ne selected Yoshi’s Story as his stage and picked Ganondorf, just as he did in their GENESIS set. However, when Game 4 started and HugS counterpicked Final Destination, rather than switching back to Captain Falcon, n0ne stayed as Ganondorf. Even as he lost Game 4, n0ne kept faith in his character, winning a tight, but still convincing Game 5, heading to yet another round in losers.

Top eight hadn’t even started yet, but n0ne was about to face the biggest test in his career. In fact, at the time, you could have easily argued that this was the hardest opponent that any Captain Falcon player could come across in bracket: Mew2King.

If there’s anyone who was worthy of the title, “Falcon slayer,” it was Mew2King. Whether it was through his ruthless edgeguarding, years of practice with Hax in the matchup or his precise punish game, Mew2King just seemed to be the natural counter to Captain Falcon, if not a huge part of why Hax switched to Fox. The perception of Sheik as Captain Falcon’s hardest matchup among many made this a daunting test for n0ne.

At this point in time, no Captain Falcon player had ever defeated Mew2King at a significant national tournament since Isai at MLG Anaheim 2006. I can assure you that no one back then reasonably expected n0ne to challenge him, let alone defeat him in a 3-1. Except perhaps n0ne himself.

N0ne defeating Mew2King at GOML 2016 isn’t just a player formerly ranked out of the Top 50 defeating a god. It’s a character overcoming a character that was once considered his unbreakable barrier; an underdog of the modern era of Melee defeating a longtime immortal player; an international player representing Latin America on the world’s largest stage; Canada having its biggest upset since Kage over Mango.

Although n0ne ended up losing a close 3-2 set to Lucky in top eight, his run remains remarkable. N0ne has continued to do well against Mew2King, taking two more sets since his first set victory, but it’s still a magical moment in Melee history – the cherry on top of one of Melee’s greatest underdog runs ever.  Chances are that we’ll see none other like it.